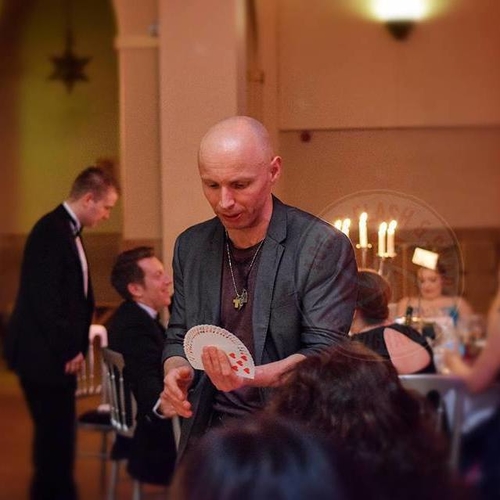 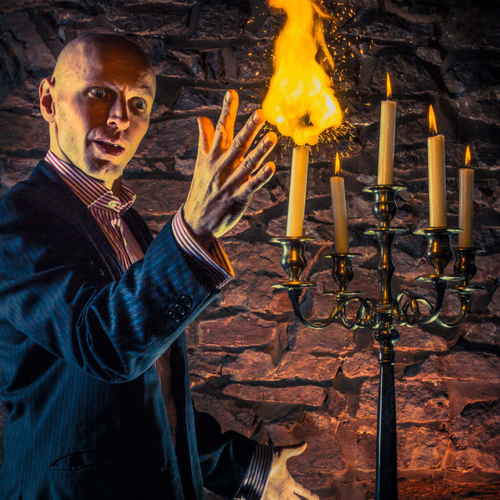 Scoop is a multi-talented magician who provides cabaret, stage and close up magic and entertainment. His stage and cabaret performances combine conjuring with comedy, illusion, sleight of hand, juggling, fire performing and mind control. His close up magic makes the impossible happen right under people's noses, sometimes even right in their hands and can be performed either table-hopping or in a walk around, meet and greet situation.

Scoop performs all over the UK and beyond at holiday parks and attractions but is still available for weddings, trade shows, exhibitions, corporate events, product launches, PR Events, conferences, seminars, arena events, award ceremonies, wrap parties and for TV performances and consultation as well as magic tuition.

His stage show combines conjuring with comedy, juggling, mind control and danger to create a truly unforgettable experience. This isn't your usual magic show with suspicious boxes and 'glamorous' assistants - this is a show where members of the audience become the stars of the show, involved in death defying stunts and baffling illusions. Even the people who don't end up on stage will be involved.

Close-Up Magic
Close-up magic can be performed either mingling between your guests or while they are sat at tables. Scoop will amaze with his skill and dexterity and amuse with his wit and humour. He has entertained at parties for sports stars and celebrities as well as Joe Bloggs from up the road. He has wowed parents and grandparents as well as kids and grandkids. He has performed in castles and mansions as well as modest flats and houses. In short, whatever you've got planned Scoop has the tricks up his sleeve to ensure you and your guests are thoroughly entertained.

Stage Show
Scoop's stage show is a mix of magic and mirth with mind control and mortal danger thrown in for good measure! A performance area is required but unlike the shows you've seen on television there are no trapdoors, mirrors or wires used; this is pure showmanship and skill that has to be seen to be believed.

Parlour Show
You may not have heard of parlour magic, it's a cross between between close-up magic and a stage show. It is a 45 minute performance which uses smaller props so that it can be performed in more intimate venues but the props are the only thing that are smaller, the wow factor and the laughs are still huge!
It can also be split into three 15 minute acts so that it can be performed between courses at a meal, either at the table or in a designated performance space. This is ideal for a smaller party of about 20 people.