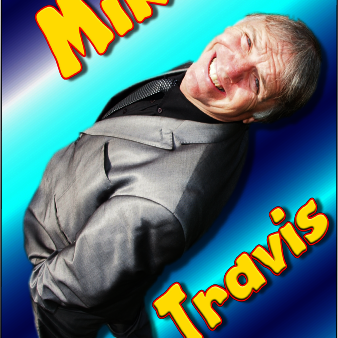 If you are looking for a Comedy Entertainer with that Something Special, then look no further, Miki Travis has that special something that makes him stand out from the rest, he has an extensive range of Jokes, an impressive skill in Magic, a popular array of Impressions and the knack of giving the audience what they want.

His Act changes in style to suit the Audience, the Venue and of course the clients wishes.

His Cabaret Act consists of Quick Fire Humour, Comedy Magic, Audience Participation & Impressions and has been seen in many countries including USA, Egypt, Canary Islands and Turkey to name but a few.

Miki can also be booked for Party Shows, Close Up & Mix 'N' Mingle Magic which has proved to be really popular at Corporate Events, Weddings, Children's Parties, Private Dinner Parties and the like.
Miki started his entertainment career at the tender age of just 14, which gives him a career span over 40 years.

He has worked alongside many top names in show biz ie Brian Connolly, Jim Davidson, Jimmy Jones, Jethro, Dave Lee, The Bachelors, Les Dawson to name but a few.

Miki is also well known in the field of childrens entertainment, and specialises in giving children fun, indeed his moto is "He's Fun To Have Around"

He has appeared at the London Palladium, Butlins, Pontins, Haven Holidays, Park Resorts, Casino Rooms, Inn on the Lake, Circus Tavern and numerous other theatres and entertainment venues throughout the country.